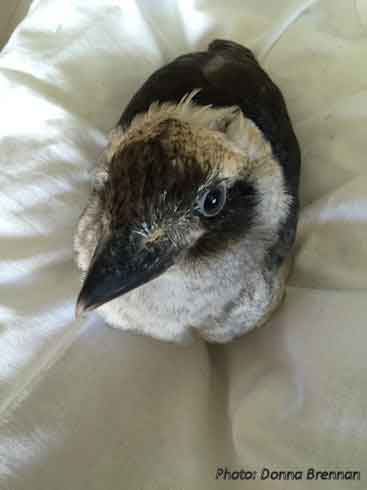 WILVOS Hotline has provided a great service 24 hours a day over the holiday period and it has been extremely busy. I must admit I thought my phone wasn’t working on Boxing Day when I didn’t receive one call for wildlife in distress.

It has been a time for quite a variety of native animals to come my care. A tiny four-gram feather tail glider tests my eyesight as I feed her, while the little Pale-headed Rosella chicks noisily await their next crop feeding.

They are in stark contrast to the Kookaburra chick that looks so big in comparison but is such a baby. Looking at me with those beautiful big eyes over that sturdy beak just melts my heart! Found on the ground, with no parents in sight, he was pitifully weak and thin but has an appetite which is soon correcting that problem.

Pipsqueak, the little Red-necked Pademelon, is still pondering on whether she is a macropod or a Guinea Pig! My two guinea pigs free-range in my yard and I call them my little ferals! A new friend has joined them. An agile wallaby was brought down from up north by travellers who found him on the side of the road, but eventually he will be returned to his home territory.
One of our release officers released my largest Brushtail Possum back home to the beautiful forest where he and his Mum had been hit by a car. Hopefully Wappa has learned some road sense and will not venture near the traffic. His departure made way for one of the other possums to move into the larger aviary and Meg, the new resident Brushtail Possum in that aviary, is sulking because she is now on only one milk formula drink a day.

I was sorry to say good-bye also to four Squirrel Gliders, but they had outgrown their aviary, and were moved on to another wildlife carer. I will miss their antics and gurgling protests when disturbed. These animals were all saved by wonderful members of the public who took the time to make a phone call when they saw either an injured or orphaned native animal.

Our sincere thanks, and I hope 2016 is the very best year for everyone.