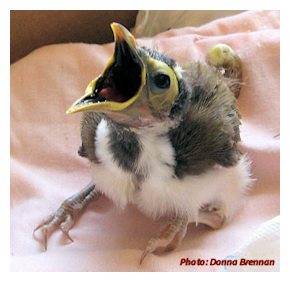 Years ago someone gave me an interesting book on cows. I thought of this recently when I had a call about a bird trapped in an old building with very high ceilings. The book had said that to manage cows one had to think like a cow. How true that was! How true it is when handling any animal.

This Blue-faced Honeyeater, unable to find his way out of the building windows, was in quite a predicament. When I arrived the shop owner and a friend were trying to catch the bird in hand nets. This is usually futile as the animals become most uncooperative. The lady had opened one of the glass windows so it was horizontal, and had placed food on it but obviously the food wasn’t of the right variety to entice the honeyeater down to window level.

I suggested turning the lights off and leaving the bird undisturbed. This quite often happens as the light from the windows and doors will be more clearly seen as an escape route. Giving him half an hour to see the result, I went off to finish my shopping.

Returning to the shop, the bird was still contentedly sitting up on a perch way out of reach. He should have been getting hungry so I drove home to my garden to collect a lovely bouquet of different coloured Grevillea, eucalypt and Callistemon flowers for him – a smorgasbord for a Blue-faced Honeyeater. I placed the lovely centrepiece on the horizontal window which was less than arm’s length to freedom.

While giving my phone number to the lady, we looked across and the Blue-faced Honeyeater had flown down and was voraciously eating the nectar off the flowers. He heard his family and friends outside and glanced out the window a few times. With a few quiet strategic moves, making sure I didn’t frighten him, the Blue-faced Honeyeater flew out the window.