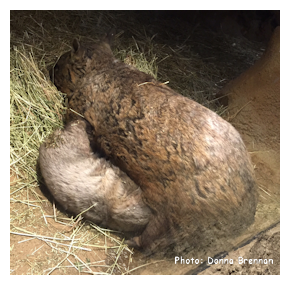 After nearly two weeks tramping around Melbourne, it is a bit of a culture shock to return home. Little Swamp Wallaby Piccallili was returned to me soon after I arrived and it was a delight to see the mischievous little fellow. Having had him since he was a furless joey with a fractured leg and tail, I actually did miss him, though enjoyed not having to get up through the night to feed bottles. My second night home saw very little sleep with Piccallili on four hourly feeds and a new tiny ‘pinkie’ Swamp Wallaby that I held overnight for another carer. Of course, coming into this time of year the influx of possums has begun, and Feathertail Gliders are still finding themselves in disastrous situations.

While away, a visit to Melbourne Zoo was on the agenda and one of the most delightful creatures was the Wombat joey. Harassing his mother for a drink, he was very persistent in targeting her pouch, and she was very resigned and obviously used to it. It is hoped that research programs presently being undertaken will lead to more knowledge of these marsupials, and a more positive future for their relative, the critically endangered Northern Hairy-nosed Wombat.

The Australian Wildlife Rehabilitation Conference in Melbourne was fascinating as always. There are always new aspects to learn in the life of wildlife care, along with catching up with wildlife carers and wildlife veterinarians from all around Australia.

A long-term wildlife veterinarian in the Kimberley spoke of the enormous decline in wildlife numbers up there. That was depressing to hear, with indiscriminate lighting of fires being a major problem, leading to the death of many native animals. With the habitat destruction happening in Queensland, Australia really does need to seriously look at the impact humans have on the environment in so many different ways.