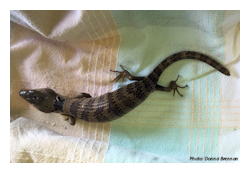 Well it’s certainly been a reptile week – starting with my daughter being bitten by a snake. It was interesting to see that children know the correct procedure to follow in such cases, occasionally more so than an adult who is often inclined to have the ‘it was just a small snake…I’m alright’ attitude.

Yes, that was my daughter! Standing on a snake, and then falling off the veranda edge after being bitten, doesn’t give much time for identification!

The ambulance arrived so quickly and they and the hospital staff were wonderful, explaining that though it may appear to be a small or non-venomous snake, precautions still have to be taken. A small Eastern Brown snake can deliver enough toxin to make a person seriously regret that they didn’t call an ambulance immediately. Fortunately, no venom was detected and all was well. Just one weary daughter to collect from the hospital at midnight!

This event was followed next day by a Blue-tongued skink being delivered to Yandina Vets after a cat attack. The Blue-tongue had been taken immediately to the vet, it received medication and I collected the little treasure to hold in care for further treatment and eventual assessment for release. In this case, because antibiotics were administered so quickly, the outcome was good and the incredibly cute reptile was released back to his habitat.

It is imperative that wildlife receive antibiotics within hours of a cat bite or scratch. It is hoped that these people learned that cats have to be contained 24 hours a day. It really is not acceptable that they roam around during the day killing wildlife, with the risk of getting run over by a car or attacked by another cat. Blue-tongues should be able to enjoy sunning themselves without the threat of constant attack. They already have to contend with natural predators such as Kookaburras.

If pets are given dried food it shouldn’t be left out in the dish. It attracts animals such as reptiles and birds that then become predated on.

In the heat the reptiles and Echidnas love a heavy shallow dish of water as much as the birds enjoy a bird bath. Echidnas are very prone to heat stress so a cool dish of water in which to sit is exhilarating for them. It just has to be in a spot inaccessible to our domestic pets. I don’t like to leave shallow dishes out on the ground at night because of toads, so a quick hose over the gardens each night makes it cool and refreshing for our wildlife.