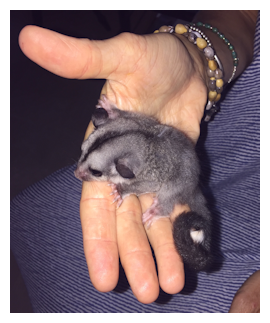 The last couple of weeks has been pretty sad for wildlife and for my domestic pets. Normally a busy time of year for our hotliners, there have been an increasing number of calls for wildlife injured or killed by domestic cats. I am not going to ease up on attempts to educate the owners of these ‘cuddly killers’.

If in doubt, read the book “Cat Wars: The Devastating Consequences of a Cuddly Killer.” by authors Peter P Marra and Chris Santella. This sometimes controversial book deals with many factors, from environmental issues to the ever increasing diseases, such as toxoplasmosis, that are carried and transferred by cats.

In the past week I have had six calls about squirrel gliders and sugar gliders being killed by cats. Besides these deaths, another adult male died in the five minutes it took me to call back the person who had phoned in. Another saw one little just furred glider joey survive. The mother and sibling were both dead. A fellow carer called a few days ago about two tiny gliders found on the dead mother after it had been brought inside by the pet cat. On top of that a lady told me her cat had brought in three gliders in the last week. This was from a seemingly intelligent woman.

There are so few of these precious little mammals left and we need to protect them. Being nocturnal, they aren’t often seen so people don’t realize they are out there in the garden at night feeding on nectar and insects. I had a very upsetting incident happen in my own back yard. It is securely fenced with small diameter plastic coated wire mesh added, inside the normal timber paling fence. For almost four years I have had two guinea pigs free-ranging in my yard. My little “ferals” I fondly called them. Hearing some squeaking I thought at first they were at their normal play, but when it continued I went out to investigate and found a cat under the trees next to the possum aviary. It had the guinea pig held down on the ground by its neck. After whacking the cat with the nearest thing which was a garden fork, yes that thought crossed my mind briefly, it let little Pedro go and took off over the fence. Sadly, though I bathed the wounds and he was given immediate pain relief and antibiotics the poor little guinea pig died. It was heartbreaking, for me and for my grandchildren who had given me these little darlings.

So is it enough to just register your cat, and put a collar on it? No, it is not a licence to kill. I would like to see more respect and consideration for both wildlife and cats. To let cats free range is ignorant and inconsiderate. Cats also deserve protection from cars and other animals that could harm them.

As I wrote in my neighbourhood letter drop, I would encourage everyone to set cat traps in their yard and any that are caught can be taken to the pound, or they may be collected. The owner is then fined and maybe that will make them realize it is not only dog owners who have to follow regulations.

If the wait is too long for a Council trap, phone the Council every day until they realize they need to have more on hand. Otherwise, get someone to make one so you have a cat trap on hand permanently, always remembering that these have to be constantly monitored so no animal is left in a distressed situation.