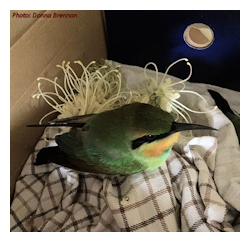 After the recent inclement weather, we can always expect plenty of calls on the WILVOS Hotline. Often the same scenarios arise. Birds come in sick and emaciated after eating grain which has become damp and toxic.

This is another reason for not feeding wild birds. The strongest argument is that when birds congregate in large numbers, such as at feeding stations in our back yards, it means that disease can be transferred very easily from one sick bird to the rest of the flock.

In the case of putting grain out, as soon as this grain becomes damp it begins to ferment and ends up not being nutritious, but pure poison! It is not unusual to have half a dozen galahs come into care soon after hot and wet weather.

A daily fresh water supply is the best we can do for our birds, with a little fresh cut up fruit if weather is wet for weeks.

Someone also asked me about the Water Dragons along Petrie Creek near the Woolworths Plaza. Apparently people throw bread and other food over the railing for them. It really is not a good idea as the reptiles do contract health issues, especially from continual ingestion of bread. Hey everyone there are no bread trees out there, as one of our veterinarian trainers always tells us! It is not a natural food!

Sadly, two exquisite young Rainbow Bee-eaters came into my care after being found on the side of the road by a couple of lads who had the common sense to ring up immediately they arrived home. These birds, though so delicate in appearance, dig a tunnel in the flat ground or into an embankment. This is about a metre long with an egg shaped ‘nest’ at the end. Where these two birds were found, the road was being widened so they had been ‘dug up’. Due to severe fractures in both birds, they had to be euthanized at the Australia Zoo Wildlife Hospital. Not a pleasant task for them also. It was a very sad outcome, but they were saved from a slow death on the road by being picked up. The lads also advised exactly where they were found so they could be returned if they had been able to be rehabilitated.