Echidnas, an incredible species of wildlife 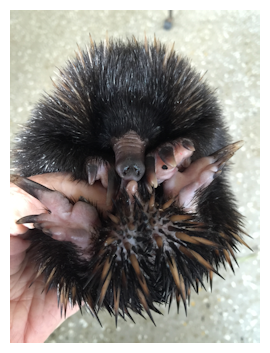 The cooler weather means that more echidnas are now being seen on the roads and in the back yard. Winter time is their breeding time which means they are on the move.

The female may be seen followed by an echidna ‘train’, which is a line of males in hot pursuit. Exhaustion, or other distractions, sees them slowly drop off until there is one male left which will mate with the female.

These Australian monotremes are extraordinary in that they lay a single egg into a ‘pouch’ which forms specially for the occasion. The egg incubates for 10.5 days in the pouch. The tiny egg is soft and rubbery, with a diameter of a five cent coin. Dr Peggy Rismiller, of the Pelican Lagoon Research and Wildlife Centre on Kangaroo Island, had the amazing experience of checking a female echidna’s pouch and actually finding an egg hatching.

Over the years Peggy Rismiller and partner, Mike McKelvey, have studied these unique creatures and given us so much more knowledge of their biology and their behavioural attributes. Somehow the puggle manages to hang on in the ‘pouch’ for almost 60 days, drinking from the mother’s milk patch. Once the prickly spines develop, understandably the young is deposited into a very cool nursery burrow. These are one animal that are not given artificial heat on arrival in care. Heat stress can mean sudden death.

It must be a culture shock for the poor little echidna, as mother only returns every 5 or 6 days to spend up to two hours feeding the young, which drinks almost half of its bodyweight in milk. They look hilarious after a feed!

At seven months of age the youngster is weaned. Mother leads it out of the burrow, gives it the last feed, pushes it back inside but doesn’t cover the entrance. The young echidna now has to be a fast learner at foraging!

It is extremely important that echidnas are never moved far from where they are found. There are no obvious sex differences in the adults, unless it is at pouch and puggle time. Therefore an adult echidna could be relocated and the young echidna could starve to death waiting for Mum to come back and feed it in the burrow.

Echidnas just have to be one of Australia’s most incredible species of wildlife.