Each day is another day of learning 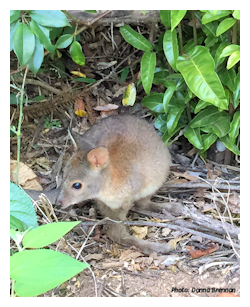 I’ve been almost dizzy from the comings and goings of wildlife through my care lately. It was a joy to see the little Red-necked Pademelon released back to her old home. She was very at ease investigating the understorey as we watched from a distance. Being a regular highway for pademelons in the late afternoon, it would not be long before others ventured in. I doubt she’d remember the “rellies” from her very tiny joey days!

Back home, a new furless joey arrives for the humidicrib. I wasn’t planning on more broken sleep, but it is never an effort to get up at 2am to feed such adorable creatures. My shrubs are again being pruned by another quickly growing trio. The smallest, an inquisitive Swamp Wallaby, spends most of his time peering out from his pouch at the larger Agile Wallaby and Red-necked Wallaby. The latter two came in within a week of each other and were both very emaciated so they are allowed to temporarily annihilate my garden. Native shrubs grow back so much better after their pruning!

It is amusing to see the wallabies stand up in surprise when the little Echidna emerges from the undergrowth! Unperturbed, it casually lumbers off into another garden. I think the Echidna is one of the most fascinating Australian native animals. It has unique traits and is often a misunderstood animal. At this time of year, the young are emerging from their burrows, the end of an intriguing biological journey. Often they are accidentally dug up on development sites before they are ready to emerge so a little help is needed along the way. Impossible to differentiate between the sexes visually in the non-breeding stage, the female develops a pouch when the need arises. She very dexterously lays an egg into this pouch, and somehow miraculously carries it until the spines become a little uncomfortable. The puggle, as the young Echidna is called, is then hidden in a very cool burrow with Mum returning to feed her youngster every five to ten days. (One reason why Echidnas should never be relocated). Instead of teats, the female echidna has a milk ‘patch’. We try to provide this similar environment when feeding orphaned puggles. They soon learn to nuzzle into the palm of our hand to draw in their milk. It is an acquired skill on both sides!

As a wildlife carer there is never a dull moment, and each day is another day of learning.