Ask for help when needed 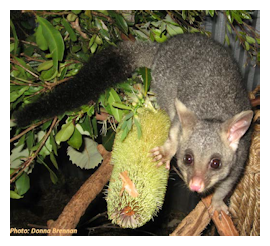 The WILVOS 24/7 Hotline – 5441 6200 – has had some interesting calls about possums lately. Our phone roster volunteers do an amazing job of finding the right person nearby to handle the different situations.

One caller in Yandina had a possum trapped in his car grille. The impact had actually opened the space wide enough that the possum went in there and suddenly found itself in a cage without a door!

There was no way of getting the poor animal out without removing the grille so WILVOS’ Sylvia to the rescue. The very obliging local mechanics in Yandina kindly removed the grille, but once that was done they stepped very quickly out of the way so Sylvia could wrestle the possum! It was not a happy animal. Nevertheless, now it is back with its family I’m sure it is truly grateful!

A few days later, a very distressed lady called from Woombye. There was a possum caught in a fence with a joey on its back. One of the neighbours told her it had been there all night. I initially thought it may have been the barbaric barbed wire which leads to the torturous death of so many animals. It was actually a Colorbond fence. One of our WILVOS carers lived not too far away and raced over immediately. Meanwhile a few of the neighbours had organized themselves and with pushing and pulling the metal in different directions, the possum was able to escape and scarper up a tree.

When Denise arrived, the possum was in the tree asleep with her youngster, with only skin abrasions on her tail. The people involved said that the possum hung onto the joey through it all. At one stage she was just holding on to it by its little tail. What a wonderful Mum.

WILVOS are forever grateful for the members of the public who phone and ask for help when our wildlife finds itself in such situations.