A Little Lorikeet in hiding 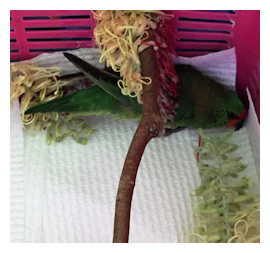 As with everything in life, wildlife caring is on an ever-learning course. After passing on most of my lovely squirrel gliders, possums and macropods late last year I was able to take in more birds. This was necessary as there has been an unprecedented amount of orphaned and injured native birds needing care. It is always easy to find a wildlife carer for the cute furry animals but unfortunately birds are not so easy to place.

I didn’t realize that I was going to meet such a range of bird species in such a short space of time. Another three masked lapwing (plover) eggs were brought to me mid December. Again the hatching rate was 100% as three weeks later there were three little chicks. The other four plovers were released, along with a fifth one that had arrived in care. The entertaining nine little dusky moorhens are only a couple of weeks away from flying and release. Sadly, one of the ten chicks died. It was the last to hatch and the weakest but I felt it was coping. Exhausted from the continual feeding, I think my weariness led to its demise. They had all learned to pick up their own food after a week or so and that was a blessing. Though precocial chicks, they aren’t quite as fast as the plovers at learning the feeding process. Maybe they were just more spoilt!

Besides the spangled drongos, koels, coucal pheasant and a number of figbirds, I had an interesting call from our local Yandina Vet Surgery. They had a little parrot there but didn’t know just what it was. I had a quick look and thought it must have been a South American or South African species. Not having any free time to do intensive research I sent out an email with the photo and soon had identification. It was a Little Lorikeet. What an exquisite Australian native bird. Almost a quarter of the size of a rainbow lorikeet, it also had its own interesting behavioural characteristics. After some days in care it did become suitably vocal. Its injuries are healing well and I am optimisitic it will survive whatever encounter it had. The person who found the little bird was worried it may have been attacked by a cat and it wasn’t able to fly. He was concerned that his dogs may take an interest in it so very kindly brought it into the vets. With pain relief and antibiotics and much bathing of wounds in saline, this little creature didn’t lose its hearty appetite. He is quite the recluse and likes to hide in a ‘tent’ in his basket, where he must rest until his injuries have healed.

Though Little Lorikeets will join in with rainbow and scaley-breasted lorikeet flocks, it is a worry that they are rarely seen. Declared endangered in South Australia, this trend usually flows north. Another species facing extinction before their existence is even common knowledge? I must say I did not know what species it was. A learning experience!